How To Read Multiple Times From An Io Reader In Golang


In this article we are going to look at how we can efficiently work with io.Reader(s). In particular we are going to see how you can read multiple times from an io.Reader. This can be for example when reading or partially reading the response body of a HTTP Request or simply the need to read a file or data from a network connection multiple times. With the highly composable nature of the Go standard library we can easily achieve this by using either of the following

The io.TeeReader package was inspired by the tee unix command). The tee unix command reads from standard input and writes to standard output and one or more files, effectively duplicating the input stream. This is what TeeReader does to certain extents, let’s have a look at the official Go doc

TeeReader returns a Reader that writes to w what it reads from r. All reads from r performed through it are matched with corresponding writes to w. There is no internal buffering - the write must complete before the read completes. Any error encountered while writing is reported as a read error.

Example of how the io.TeeReader works

You can also try it here on the Go playground https://play.golang.org/p/XtUMQtMdXjn

NB When using the io.TeeReader remember to read ALL data from the input reader as the data is copied as long as is read. If you only read a portion of the input stream the TeeReader is going to copy only that portion into the buffer!

The io.ReadSeeker in Go is a combination of the io.Reader interface and the io.Seekerinterface. This allows us to re-wind a reader to a specific location of the stream by passing an offset relative to the start, current location or end of the stream (which can be a file stream, a string, a network connection or anything that implements an io.Reader). Let’s see first the signature of the io.Seeker Seek method

Let’s see an example on how we can read multiple times from the same io.Reader using the io.Seeker interface

You can also try it here on the Go playground https://play.golang.org/p/pLPbo5dwaFt 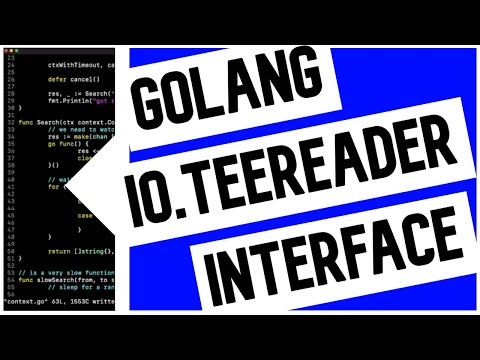